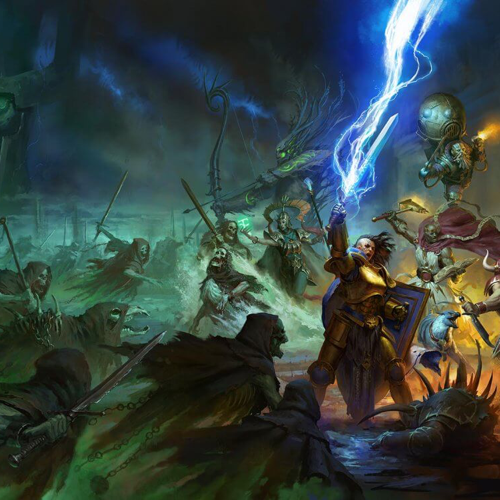 Teams of three face off against each other for battle with individual games at 2000 points each. One battle will not decide your ultimate fates in the grand war for the Mortal Realms. You win or lose together as a team of generals!! You must strategically decide at the beginning of each round which generals will fight each other. The winner of each battle round will be decided by the team with the most points and major victories. Your individual games matter as you each contribute to the war effort! **Lists are due 02/20** When you sign your make sure to email your team name. The tournament is capped at 6 teams of 3 for a total of 18 players. If you do not have a team and wish to play please sign up. We will pair any singles or double into the appropriate teams of three and connect you to each other to plan your armies ahead of time. Email us after you sign you up as a single or double at: seansparkman23@gmail.com 5 round event: 3 rounds on February 26th & 2 rounds on February 27th Event open to all ages!! For those that are 21+ BYOB Team size: 3 players per team. Each player will have their own 2,000 point army. Team format: We will be using a modified version of the World Team Championship 40K rules. There will be a pairing process at the beginning of each round. Players will have the opportunity to decide which players from each teams play each other and choose the terrain they each play on. Team army format: No faction, warscroll unit or models may be duplicated in a team’s armies. Each player must play a different faction. Factions may be from the same Grand Alliance. You may not duplicate models on your team even if they are an ally or coalition available to your army. For example, Sons of Behemat mercenaries are available as allies to most factions, these models have a different name than the standard Warstomper Gargant such as One-Eyed Grunnock, these are not allowed in your army if your teammate also has a standard Warstomper. Terrain Rules: There will be a very simple set of terrain rules in use at this tournament. The rules are meant to encourage use of the terrain and provide tactical advantages while remaining easy to use and within the spirit of AOS. These will be outlined in the Tournament packet which will be released to players the week of February 1st. Tournament packet will encompass: pairing process, scoring, terrain setup, mission selection per round, and terrain rules. This will be released the week of February 1st. Battle size: 2000 points Board size: 60” x 44” Army building & Missions: We will be using the General’s Handbook 2021 for army building rules and missions. It is required to upload your army list by the deadline into the Best Coast Pairings app. **Painting not required to participate. However there will be points awarded each round to fully painted & based armies in GW battle ready condition.** Be prepared to follow the mission instructions for terrain set up to be done by the players. All terrain will be on the board upon arrival and all pieces must be used. Faction terrain will be placed according to the warscroll rules of that terrain. Proxies: Are allowed with approval of the tournament organizer. Please email photos and description to: seansparkman23@gmail.com Tools: Player’s are expected to bring all the necessary tools for war. Including your army, tape measure, rules, army roster, and objective markers. Round time: 3.5 hours per round. The first half hour of each round will be for the pairing process. Be prepared to deploy in a timely manner to complete your games in the time limit. If you cannot complete your entire game, then do your best to talk through the final turn and determine a winner. Judges are available to oversee the talk through if requested. Conceding: You may decide it is in your best interest to concede a game. However, in the fairness of not being able to complete a game, the conceding player must give their opponent a maximum point major victory for that round. Scoring: It is highly recommended to write down your scores each round on the scoresheets provided. Players will submit their total score at the end of the round on the Best Coast Pairings app. Judging: There will be a judge available upon request and you are always welcome and encouraged to call upon them at any time. The judge will be roaming the event and has the power to stop any instances of illegal play he/she may see. Our goal is to make the event enjoyable for everyone in attendance. Prizes: Trophy and prize to the best overall based on victory points. Prizes awarded to runner ups. Other prizes may awarded for sportsmanship and epic moments at the discretion of the judges. Refund policy: full refund available until 02/01/2022. No refunds after 02/01/2022. Our Cardinal Rules are the same rules that Games Workshop follows. Always be polite and respectful • Always tell the truth and never cheat. • Principles • Arrive on time with all of the things you need to play the game. • Avoid using language your opponent might find offensive. • Offer your opponent a chance to examine your army roster before the battle starts. • Answer any questions your opponent has about your army and the rules that apply to your army. • Measure moves and distances carefully and accurately. • Give your opponent the chance to examine your dice rolls before picking up the dice. • Ask permission before touching any of your opponent’s miniatures. • Remind your opponent about rules they may have forgotten to use or that they have used incorrectly, especially when doing so is to your opponent’s advantage rather than your own. • Never deliberately waste time during a game. • Avoid distracting an opponent when they are trying to concentrate, and be careful to respect their personal space. • Never complain about your bad luck or your opponent’s good luck. • Never fix the outcome of a game.