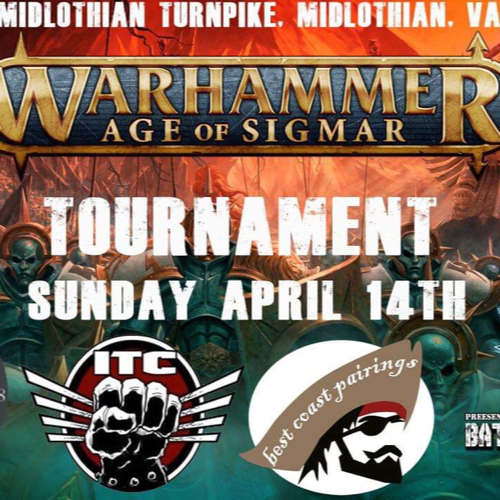 2000pts using GHB2018 or Battletome, whichever published most recently, as well as any FAQ. You may use artifacts from a realm of your choosing. We will neither play with realm specific rules nor with magic from those realms in this tournament. SCHEDULE: 10.30 - 11.00 Check-in 11.00- 1.00 Game 1 1.00 - 1.45 lunch 1.45 - 3.45 Game 2 3.45 - 5.45 Game 3 6.00 -6.15 Awards PRIMARY OBJECTIVES (1-5pts) : Battleplans will be selected from GHB 2018 at random at the start of every game. Victory Points difference 0-2VP = 3 - 3 3-4VP = 3 - 2 5-6VP = 4 - 1 7+ VP = 5 - 0 SECONDARY OBJECTIVES (1-3 point. 1 point per successful objective) : Choose 3 secondary objectives at the beginning of each game. Write them down on a piece of paper and place it together with your opponents to the side of the battlefield. Your opponent should not know your objective until the end of the battle. You may NOT choose the same objective multiple times during the tournament. HEADHUNT - Kill your opponents General PROTECT YOUR SUPERIOR - Survive with your General FRENZY - Remove half of your opponents model count from the table by the end of the game BEHIND ENEMY LINES - Have 2 units without behemoth or artillery keyword in your opponents deployment zone by the end of the game TACTICAL MURDER - Remove all your opponents wizards/priests from the battlefield. BRING DOWN DA BIG THING - Kill a unit with the Behemoth Keyword TACTICAL DEPLOYMENT - Control more table quarters by the end of the game than your opponent. To control a table quarter you need to have more models in that area than your opponent. A table quarter is a 2x2’ tile in the quarter of the battlefield. HOLD THE LINE - Prevent your opponent from models in your deployment zone by the end of the battle. SHIELDWALL - Survive with more than half of your starting model count on the board by the end of the game. Summoned units do not count towards your starting model count, but count towards total units being destroyed. ENCIRCLED - have 2 units without behemoth and artillery keyword wholly within 9” of the center of the battlefield by the end of the battle. MEAT FOR THE GODS - Kill at least three battleline units. LIVE TO FIGHT ANOTHER DAY - Walk off your opponents deployment zone board edge with one unit with Hero Keyword and one unit with a non-hero Keyword containing at least three models. PAINTING REQUIREMENTS: There will be NO PAINTING OR BASING REQUIREMENTS. However, if a tie comes up during the game. Painting and basing counts as a tie breaker. If one player has a fully painted/based army and the other player does not. The player with fully painted/based army wins. Entry is $10 which will go towards the following prices: 1st Place 2d Place Best Painted Best Sportsman Everyone will have to vote on their favorite player at the end of the third game. Notes will be passed out to all players during game three. Best Painted and Best Sportsman will be by popular vote.