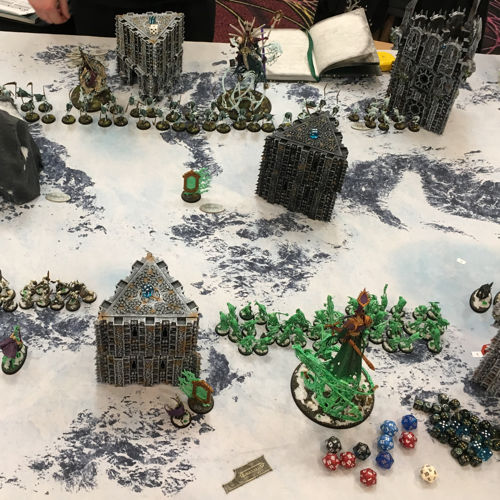 Come on down for Blooded Sands 2,000-point RTT held at the prestigious Imperial Outpost in Glendale, Arizona March 10th, 2019! This is a one-day, 3 round event for ITC. Yes, it is held on a Sunday. The seats are first come first served, so signing up as a preliminary measure is highly recommended! Rounds are 2.5 hours exactly, dice down is called at that time and the game is over once each player has played an equal number of turns. When performing the final rounds, each player gets 2 minutes per phase then must move on to the next part of the turn. The tournament will start sharp at 1030a, I suggest arrival at 10a! PLEASE BRING CASH AS THE REGISTER IS NOT YET OPEN. Scenarios will be rolled randomly for each game. ALL TERRAIN WILL USE DEADLY RULES. There will be ONE realm spell rolled for each wizard from corresponding realms at this tournament! See below for tournament specifics in regards to scoring and such as these are pervasive for the entire Phoenix valley. For this event there is no painting restriction put in place! Reasonable proxies are allowed but must be verified before the tournament for highest likelihood of acceptance. You are free to roll the dice the day of, however mind you there is no guarantee you will be allowed to use it! Entry for the event is $10 all of which goes towards prize support! Tournament general rules and clarifications: The roll for choice of sides and deployment provides the winner with the decision who will perform these actions. A major victory is worth 8 points, a minor victory 5, a minor loss 3, and a major loss 0. Additionally, each player will have 3 secondary objectives each game that will give them 1 point each towards their battle total if accomplished! These are: Kingslayer: Kill the enemy General Onslaught: Destroy the enemy player's most expensive non-general unit Linebreaker: have a unit within 12" of the back-board edge of the enemy deployment zone at game’s end. These points will contribute to in game points. So, if you accomplish 2 you would add 4 points to your total for that round. Points destroyed will remain the tie-breaker. Battalions for victory points will only count if the battalion has been destroyed. Endless spells will only count for victory points if they have been dispelled by the enemy or haven't been summoned during the game. And finally any "free" points left over (under points, buying extra CP) will be automatically awarded as victory points to the opponent. Players can use terrain rules and further realm specific battle effects so long as both agree completely before rolling for sides and such for the battle. If one player does not want to, these rules are not allowed to be used aside from what was assigned for the scenario. Vertical measurement must be used for all terrain. For some tournaments, the focus will be on new players. Please read the restrictions section (if included) very carefully to ensure no surprises are had upon start of the tournament! Valley-wide philosophies: No player will bully, yell, intimidate, or comport themselves in any way that threatens the safety or experience of other players. This also involves cheating in any capacity, inability to have civil rules discussions, and generally playing as such to provide your opponent with a poor experience. Any of this is taken extremely seriously, and if you do not act with respect and composure during tournaments you will be immediately removed from the premises and no longer welcomed at any events run by Troy, Robert, David, Derek, or Mike from here on out. This is a zero-tolerance policy. For any further details or clarifications, please email me at TellTaleNoob@gmail.com!